I edit this website and quarterly print publication from the Nieman Foundation covering thought leadership in journalism. During my tenure, Nieman Reports has won, among other awards, five Mirror Awards, two Bart Richards Awards for Media Criticism, two Eddie Awards, and two EPPY Awards, one for best digital magazine and one for best web redesign / relaunch.

Don’t Look Away: Photojournalists Are Documenting the Brutality of Russia’s War in Ukraine

There are layers to bearing witness, from the war's victims, to journalists in the field, to readers like you

Prior to the invasion, few Ukrainian journalists had experience working in conflict zones. Now the war has come to their homes

Reporting in Ukraine: “This War is Unpredictable and Deadly Like No Other”

Fighting for A Free Press in Ukraine — and Beyond

As Ukrainians defend their country against the Russian invasion, journalists there and in other post-Soviet states guard their fragile press freedoms

Ukrainian Journalists Risk Everything to Stand Up to Putin

Call Out Bigotry in Reporting on the Ukraine Invasion

In Europe, Podcasters of Color Make Their Own Space for Conversations on Race

Lessons from the Pandemic

Can — or should — journalism return to a pre-pandemic “normal?”

In India, the Last Few Bastions Of The Free Press Stand Guard Against Rising Authoritarianism

How Indian newsrooms are holding the Modi government to account

The Real Meaning of “He’s No Angel” for Journalism

Journalism in Myanmar: “An Apocalypse for The Media”

Alexei Navalny, Social Media, and the State of the Free Press in Russia

The space for independent Russian journalism is shrinking, but a handful of small outlets still offer an alternative to state media

How the pandemic, anti-police brutality protests, and Atlanta spa shootings starkly illustrate the need for community and immigrant-serving media outlets

Covering Extremism: “As Exhausting a Beat as It Is Important”

In India, Journalists “Are Fighting For Whether Truth is Meaningful or Not”

By connecting systemic inequities to environmental harms, environmental justice reporting covers everything from race and housing to healthcare and immigration

The Extremist Mob at the U.S. Capitol was America, Too

How Journalists Beyond the U.S. Fight Back Against Government Intimidation 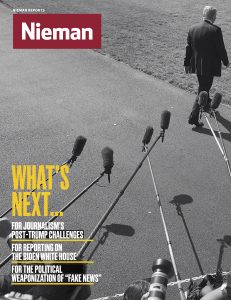 The Newsrooms We Need Now

True Newsroom Diversity Must Account for Disability Status, Too

To Change Its Future, The Kansas City Star Examined Its Racist Past

Don’t Exoticize Latino Voters; Report on Them as Americans

To Move Forward on Racial Equity, Newsrooms Need to Reckon with Their Pasts

Journalists Can Help People Tell Their Own Stories by Talking Less, Listening More

Newsrooms Should Make Space for Emotions

Before You Can Fix Your Newsroom, You Need to Fix Your Life

Journalists Need to Remember that Not All News Readers are White

Is Movement  Journalism What’s Needed During this Reckoning over Race and Inequality? 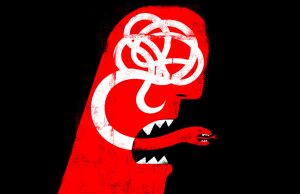 How Nimble, Mission-driven Outlets Are Telling Stories about — and for — Black Communities

Learning from Little Rock: A Look at Black Lives Matter Protests and the Role of Local News

Refugee Journalists Bring Access to Stories that Would Otherwise Be Missed

Reporting and Resilience: How Journalists Are Managing Their Mental Health 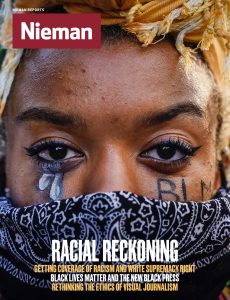 The Impact of the Coronavirus on Journalism

Without a Campaign to Cover, Reporters Shift to Covering the Voting Process Itself

How coverage of the coronavirus in Italy, Spain, France, and Germany has impacted trust in news outlets

Three Ways To Counter Authoritarian Overreach During the Coronavirus Pandemic

Speculative Journalism can help audiences think about the future, but critics question if integrating science fiction into journalism is responsible

Journalism and Prediction during the Coronavirus Pandemic 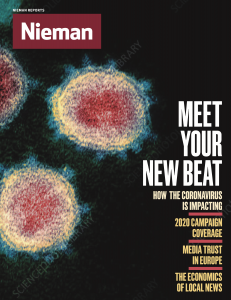 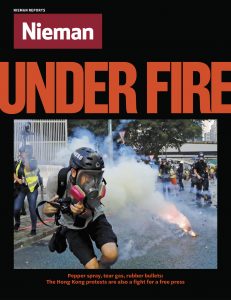 How Implicit Bias Works in Journalism

On the 80th anniversary of the Nieman Foundation, Nieman Fellows reflect on the journalism that’s left an indelible mark on them and their careers 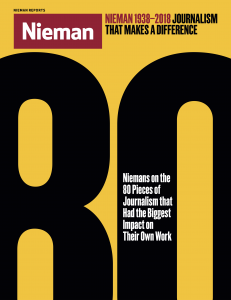 "What Ever Happened to the Free Press?”

The Nieman Foundation is joining more than 300 news outlets publishing editorials on Aug. 16 in support of freedom of the press, an effort initiated by The Boston Globe

Critics and Online Outlets Leading the Vanguard in Arts Writing

From heady journals to Tumblr manifestos, innovation in art criticism is happening outside the mainstream 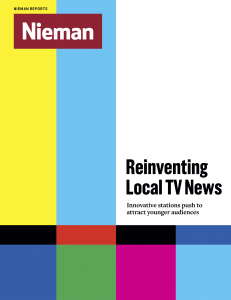 At a time when political and social divisions over race are constantly in the headlines, news outlets are striving to cover the issue with accuracy and sensitivity

"Almost Everyone, On Every Beat, Becomes an Immigration Reporter at Some Point"

Covering immigration requires a multidisciplinary approach to reporting, from economics to politics to education

How newsroom leaders can create workplaces that truly support women 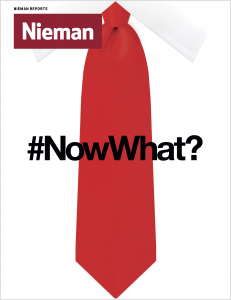 A look at news outlets bringing innovation, urgency and new audiences to stories on climate change

"A mass shooting, only in slow motion"

Newsrooms are moving away from a focus on mass shootings to tell more nuanced stories about the people and communities marred by gun violence
For this piece, Glenn Jeffers won a SPJ Sigma Delta Chi Award for magazine writing.

Where Are the Mothers?

If news organizations want to attract and retain millennial journalists, it's essential that they work to better meet the needs of parents and create better work-life balance for all employees

What Journalists Must Do Next:
Reporting in the Age of Trump 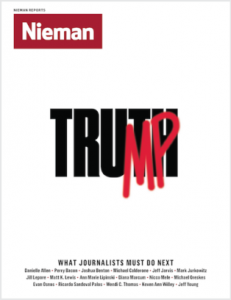 Automation in the Newsroom

The case for more inclusive newsrooms 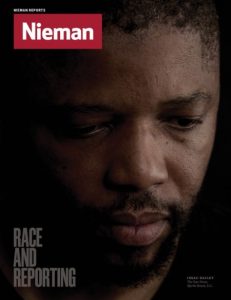 Where Are the Women?

The State of Journalism in China 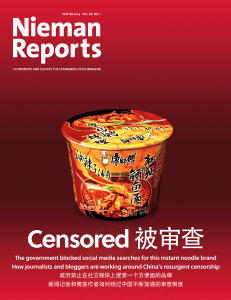 Organize the Noise: Tweeting Live from the Boston Manhunt

From September through December of 2012, I was the founding editor-in-chief of The World Weekly, a freemium international news magazine combining original journalism with curated content from the best publications around the world. I co-developed the magazine's editorial formula and edited the first three issues. You can read my inaugural editor's letter.

I worked for TIME from 1993-2006, first as a Netherlands-based stringer, then as a writer, senior editor, founding editor of timeeurope.com, deputy editor and ultimately as Europe Editor, responsible for the European edition of the magazine.

The Other Face of France

writer/editor
Can France bring order to the streets and hope to the restive minorities of the banlieues? 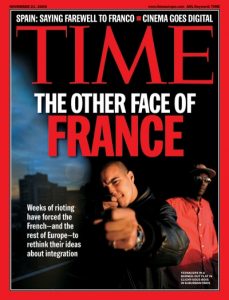 The Lost Tribes of Europe

writer, cover story
As national borders blur, the Continent's original minorities are fighting to reclaim their ancient cultures and identities 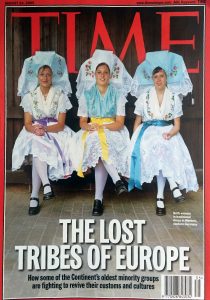 editor
After a massive manhunt, Britain's suspected suicide bombers are nabbed. But that doesn't mean the threat of more attacks is over

editor
Tony Blair looks set to win what he's said will be his last campaign. But for many, the Iraq war has tarnished his legacy 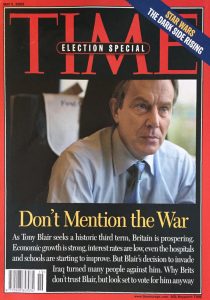 Slaughter of the Innocents

senior editor
Inside the Beslan Siege

writer
James Geary joins a crowd of James Joyce devotees on a Bloomsday trek through Dublin in pursuit of the elusive, allusive soul of Ulysses

A Strike at Europe's Heart

writer, cover story
Science can pinpoint potential dangers from GM foods, mobile phones and household chemicals but can't tell us if those risks are real. What's a consumer to do?

This article won the 2004 British Environment and Media Award. 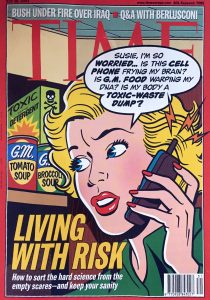 Inside the Moscow Siege 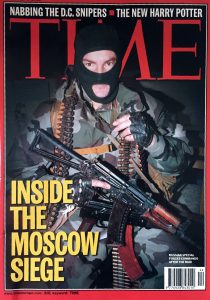 writer
Scientists are melding computer chips with the human nervous system, allowing people to extend, enhance and repair their senses

A Brief History of the Higgs Hunt

writer
Scientists in Switzerland may have solved one of the great mysteries of particle physics. Why should we care?

In the Fast Lane
Seven years after regaining independence, Estonia is well on its way to joining the E.U.

In the Visions of Europe special issue, Time included Magdeburg, Germany on a map of potential flashpoints for conflict, due to its record of far-right violence. This outraged the mayor, Wilhelm Polte, and many others in the city. Mayor Polte invited me to visit Magdeburg to see for myself. I accepted his invitation and wrote this piece as a result. Mayor Polte neglected to inform me that he had arranged for local news teams to be present at our meeting with residents and officials. So in this segment I am clarifying Time's coverage and explaining that the piece was based on reporting by Time staff and stringers in Germany, not by journalists in New York, which the mayor and others thought was the case. Unfortunately, the German translation of my remarks makes it sound like I was distancing Time from the reporting; I was not. In fact, I was defending the reporting because it was based on local experience and local knowledge from Time journalists in Germany.

The New Age of Discovery

In the Realm of the Senses
Scientists are using advanced computer technologies to extend, enhance and repair the power of the senses. I later expanded on the research in this article for my first book, The Body Electric.

The Undiscovered Country
Death remains life’s ultimate riddle, but is it inevitable? 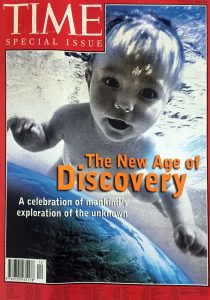 A Doctor Who-themed, time-traveling tour of some of the issues raised and people featured (including Sir John Maddox about 25 minutes in) in Time's The New Age of Discovery special issue 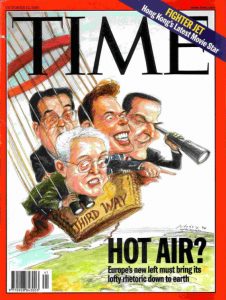 Mad About the Noise

writer, cover story
Too much noise is driving people mad

writer, cover story
Half the world’s languages are faced with extinction. Does it matter? 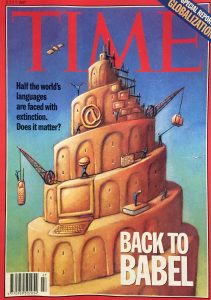 writer, cover story
Scientists are beginning to grasp how memories are made and stored in the brain. Can "memory drugs" be far behind? 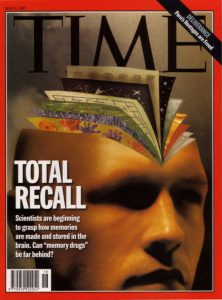 This was my first cover story for Time, and to mark the occasion my son, Gilles, and I were the subject of this issue's editor's letter.

This is my first appearance in Time magazine. Having traveled to Albania on assignment for another title, I stumbled across the opening of the first privately-owned art gallery in the country since the fall of the Stalinist regime. This piece was based on my reporting of the event, and I received this fax of thanks from the gallery owner after I sent him a copy of the article.

May 17, 2010
The Interphone study finds no increase in risk but the long-term effects of prolonged cell phone use require further study and will spark fresh controversy 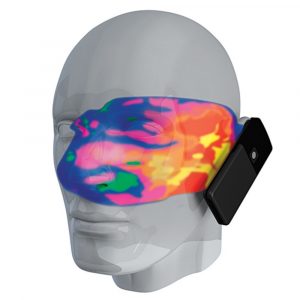 On The Media
May 21, 2010
Cell Phone Study Provides Few Answers
How can one study produce so many conflicting reports?

March 2010
Your cell phone does not in itself cause cancer. But in the daily sea of radiation we all travel, there may be subtler dangers at work

Who Protects the Internet?

April 2009
Pull up the wrong undersea cable and the Internet goes dark in Berlin or Dubai. Meet the people who stand guard over the World Wide Web

Podcast: Who Protects the Internet?

I was editor of Ode / The Intelligent Optimist, a magazine about positive change, from 2006 to 2012. During my tenure, Ode won three gold Eddies and a silver Eddie in the Folio awards and three Maggies in the Western Publishers Association awards.

The Unbearable Lightness of Boredom

July-Aug. 2013
The surprising benefits of being bored

Jan.-Feb. 2013
One man's odyssey to retrace and reduce his water footprint

Nov.-Dec. 2012
How persistence makes us who we are

July-Aug. 2012
How doubt can lead to greater intimacy, enhanced self- confidence and a deeper sense of spirituality 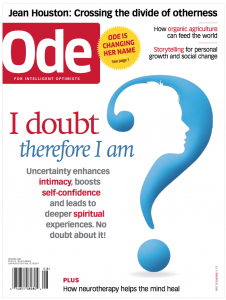 Jan.-Feb. 2012
It's followers who have solutions to our most challenging social and political problems

The Wisdom of One 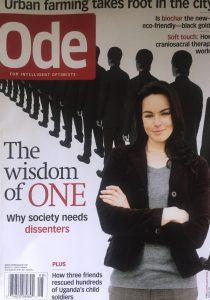 The Joy of Dirt

Aug. 2009
A special issue devoted to all things jesting and jocular

In the Beginning Was the Joke

I Laugh, Therefore I am
Grins and giggles may hold the key to our social evolution 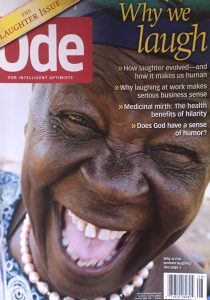 In Praise of Failure

Oct. 2008
Failing is among life's least pleasant experiences, but nothing else is as essential to success

July-Aug. 2008
Everything you always wanted to know about peace and quiet

Ode to the Ear

Quiet, Please!
Noise pollution can damage your health and shatter your piece of mind. here's how to turn it down 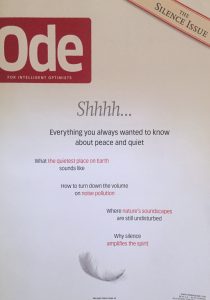