The epigraph at the start of Sharon Dolin‘s Manual for Living is from the Stoic philosopher Epictetus (Geary’s Guide, pp. 326–328) and reads:

Know first who you are, and then adorn yourself accordingly.

Roughly the first third of Dolin’s book riffs on and is inspired by Epictetus’s Encheiridion and Discourses, in which his observations and aphorisms were recorded by his friend and follower Arrian. Dolin takes an aphorism from Epictetus and uses it as the title for a poem centered around that saying, updating the Stoic stance towards the vagaries of life with contemporary relevance. In ‘Approach Life as If It Were a Banquet’, Dolin writes with Stoic brevity of the evanescence of all things…

Implore no more / for what is, is no more.

Epictetus followed the standard Stoic line that we are not masters of our own fate and that unhappiness results when we hold mistaken beliefs about what falls within our sphere of influence. Some things are up to us, he wrote, and some are not up to us. In the great drama of human life, Epictetus said:

What is yours is to play the assigned part well. But to choose it belongs to someone else.

In ‘Always Act Well the Part That Is Given You’, Dolin writes:

In ‘Happiness Can Only Be Found Within’, Dolin matches Epictetus’s

A person’s master is someone who has power over what he wants or does not want, either to obtain it or take it away. Whoever wants to be free, therefore, let him not want or avoid anything that is up to others.

All honor, steady bliss / comes from the peerless pear you raise / to your own lips.

And, in ‘Pay No Attention to Things That Don’t Concern You’, Dolin braids a fresh thread onto the Epictetus line

No man is free who is not master of himself.

Give up on self-belief / you’ve got to seek / in crow’s feet / of another’s smile.

I had the pleasure of spending a day last April with Sharon and other aficionados at a one-day aphorism symposium in Hartford, CT, organized by Jim Finnegan, proprietor of the ursprache blog and genius loci of Tramp Freighter. (That’s us in the below pic.) Dolin read from Manual for Living and other aphoristic work that day, demonstrating her gift for deftly slipping Stoic wisdom into poems that succeed as both lyric and aphorism. 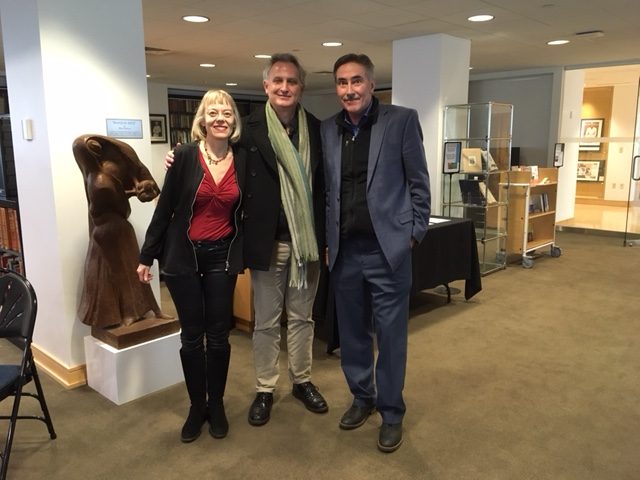